A buttery brown sugar and cinnamon mixture is swirled into a white cake and topped with a glaze in this recipe for Cinnabon(R) roll cake.

This was so good! I made it for Mother’s Day brunch and it was a hit. I chose to use a DH box white cake in place of the scratch cake, but followed the recipe for the swirl and glaze. I also chose to bake it in a bundt pan (about 38 minutes; you know cake is done when you press on the top and it bounces back). for nicer presentation. This will see repeat action at the LTH house. THANKS, for the recipe!

I too used a yellow box mix. The reason was that in the ingredients this calls for 3 C. flour and in the actual directions it says use 2 C., I wasn’t sure so used the box mix. I made the cinnamon/ butter mixture exactly as recipe and the confectioners sugar mixture exactly as well. It turned out awesome. Super moist and lots of cinnamon flavor. I will make it again.

Very good. Just made this and the 3 cups of flour is the correct measurement.

Made this today! so delicious, I read the reviews and used a cake box mix and my family loved it! topped with homemade cream cheese frosting I had previously made. 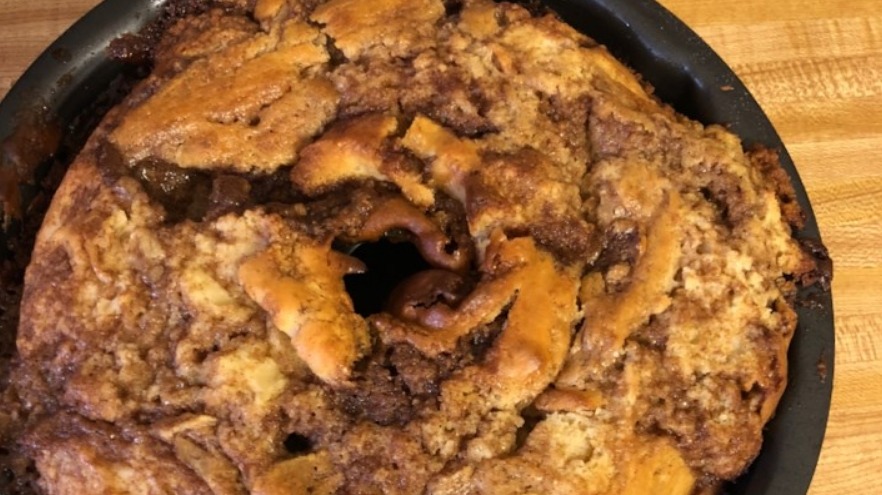 Oh my…so good! I also used a yellow cake mix and bundt pan, baking for 36 minutes, but followed the rest exactly. I did find it made too much glaze for our taste so will probably cut that part in half next time. Topping is exceptional. If you like cinnamon you will love this cake. Thanks for the recipe 🙂

This is so good!!! This was my first attempt at making a cake from scratch and it was so worth it! The only change I made was I added a little cinnamon to the regular cake batter. It was so yummy!! Definitely a keeper recipe.

This was delicious BUT 4 stars because the directions were not same as ingredient list! The fact the main photo is a bundt cake but directions are for a 13 x9 pan was weird. The owner of this recipe must read the reviews & see it needs to be edited for corrections. Because I’m handicap I went with the cake mix as several people mentioned. (also not knowing which is correct ingredient list or directions) The cinnamon/sugar part made this delicious. My coffee gang loved it.

I got great reviews of the cake, but like the others, I had a discrepancy in how much flour to use and I only used the 2 cups. I didn’t notice the missing cup right away because I was food prepping for a sick relative and was making several things at once. This gave the cake a quite spongy consistency that I wasn’t a big fan of but everyone else seemed to like it. Next time I will use 3 cups to get better cake-like consistency. I thought the flavor was good, but I took off one star because of the recipe discrepancy.

3 cups flour
1/4 tsp salt
To Find Out All The Yummy Ingredients And The Step By Step Directions To Follow for this Delicious recipes,Go to the next page.

Don’t Make These Common Mistakes When Cooking Eggs; Do It …