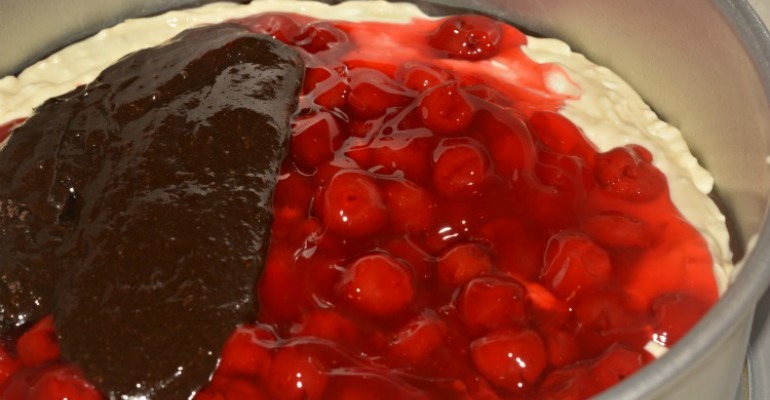 I told myself once that I would try to be friendly to new neighbors just as how they became friendly to me and my boyfriend when we first settled in the neighborhood. Mrs. Hess and her family moved to a house in beside the one that’s in front of mine. She was a middle-aged lady with a husband who laughed like Santa Claus and two extremely attractive boys (except they were teenagers, bummer). I was one of those who first saw them so I approached them and said hi. We had a bit of a talk.

I learned that they moved here from Ohio because of the work of her husband. I also learned that her boys were musicians who wanted to stop studying just to pursue music.

Because of that small talk, I and a couple more women from the neighborhood were invited to tea the next day. I was a bit shy to go, but I was glad I did. If I didn’t, I would have missed her heavenly brownie cheesecake with cherries.

I’m not a fan of cherries, but they tasted heavenly in this dessert that I felt like I crossed over into dessert heaven. This recipe over at the Hugs and Cookies XOXO offers the same delicious cake that will have you eating from one slice to another!

Photo and recipe courtesy of Hugs and Cookies XOXO.

USE THE BUTTON NEXT PAGE LINK BELOW FOR THE RECIPE AND INGREDIENTS.