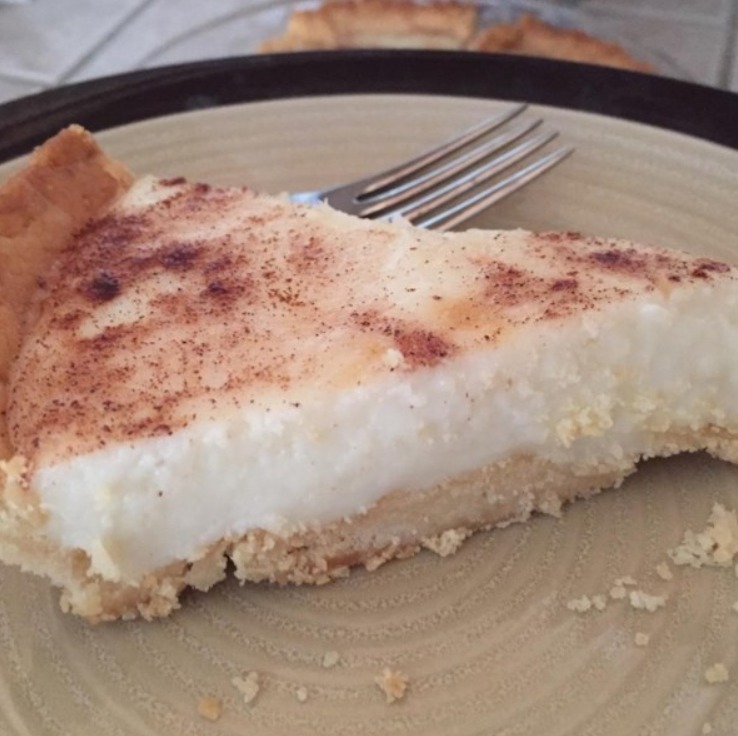 I am a Hoosier who grew up with greatest Sugar Cream pies thanks to Mrs. Wick’s in Winchester, IN, as well. This is a wonderful recipe. I lessened the sugar to 2/3 a cup and it tastes great! Some words to the wise: Cook sugar/half&half mixture on medium to medium high, but don’t let it burn and don’t stop stirring! For those of you who couldn’t get it to turn, keep stirring and be patient, as it takes a little time to happen, but when it does, it’s magic! And when they say “Watch Carefully when it’s under Broiler”, they mean it! It could take as little as twenty or thirty seconds to bubble. (I left mine in for one minute and it burned the butter covering so I had to fix it.)

Funny story. So, while I’m reading the reviews, preparing to make this for our New Years Day dinner, I saw that someone mentioned wanting to try adding bananas next time….and yet another person mentioned drizzling with chocolate syrup and it would taste like an eclair! So I thought to myself, “Hey! Why not add BOTH banana AND chocolate syrup and end up with a sundae pie!” Right? So I send my poor hubby to the store for a banana, since now I don’t have all the ingredients! He was hijacked or something at the local market and ended up taking an HOUR to get back with the banana! In the meantime, I had started cooking this mixture and it (very suddenly!) became the right consistency! Shoot! Still no banana! Poured it into the GRAHAM crust and remembered that I hadn’t added the vanilla! (“Where’s that BANANA?”, I’m thinking!) So while I was waiting (argh!) I put the vanilla into a little kitchen spray bottle that I have and gently misted the top of the pie! (by this time you’re probably thinking I have never cooked a thing in my life, right?) LOL When he (finally) got home, I sliced the banana (resisted rapping him up-side the head with it!) and arranged slices on top of the vanilla misted pie! Dab of whipped cream, drizzle of syrup and a cherry on top. Even after ALL of this, the pie was AWESOME! So I gave 5 stars because I KNOW that if it wasn’t for this recipe, it COULD NOT have been possible! Note to self: Make hubby take kids along next time! 🙂

We loved it! They were not kidding when they said that the mixture needed to be cooked at a high temperature. At first, I cooked it at a mid temperature and it never got to that consistency needed. When I turned the temperature up, it thickened quickly. Thanks for the advice.

I’m from Indiana and my grandmother was famous for her sugar cream pie. Here are some tips to make it turn out. Substitute flour for the cornstarch-it will thicken up no matter how long you stir it-and let it boil and thicken up on the burner (while you stir it) until it thickens and is creamy. Grandma never used the cinnamon or the vanilla (it evaporates anyways) and she used 2 1/2 cups of cream or evaporated milk. Bake at 325 for about 30 minutes on a cookie sheet and be careful to watch it the last five minutes so it doesn’t start boiling over and ruining the pie. Once it starts to boil, take it out, it’s done. Cool completely before cutting and enjoy!

My husband made this for me and we both loved it, though I though it was a bit too sweet. Next time, we’ll add only 2/3 cup sugar. We didnt have half-and-half cream, so we used half heavy cream and half milk (which is what half-and-half is anyway). I’d eat the filling as a pudding by itself if I could! As for the 1-star rating below, if you cook a mixture with corn starch too long or over too high heat, the thickening agents will no longer work.

1 pie shell, store-bought or homemade
2 cups heavy cream
1 cup sugar
To Find Out All The Yummy Ingredients And The Step By Step Directions To Follow for this Delicious recipes, Go to the next page.