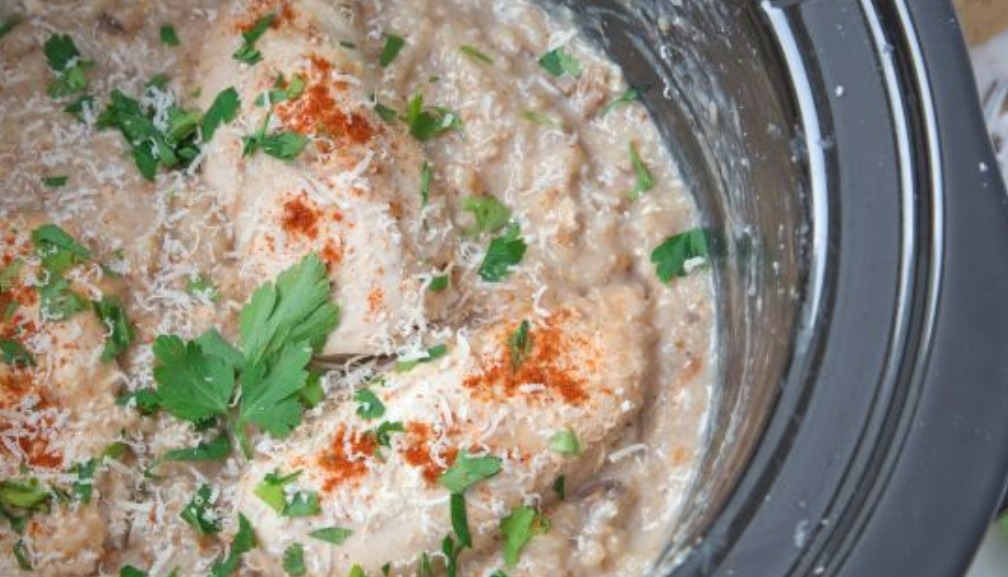 I’ve made this twice now and it’s a pretty good recipe. I cut the recipe amounts in half since I only needed a few servings. I didn’t bother sprinkling the parmesan cheese and pepper on top but just mixed them in with the soup and rice mixture. I cut up my chicken breasts into smaller pieces because I was afraid the rice would cook faster than the chicken otherwise. It did need a bit more flavor so I sprinkled in some garlic powder, onion powder and extra pepper. This is so much easier than cooking rice and chicken separately for a casserole so this is a recipe I’ll be using again.

I was skeptical when I saw 3 cans of soup go into this and I almost deleted it until I read the 1st reviewer which stated my concerns with the soup and that it would have a processed taste which she stated didn’t. I decided to try it. I used 50% less fat Land of Lakes Margarine to cut down on the fat. It takes a 3 quart or 9 x 13 in casserole dish which isn’t stated in the recipe. I decided to give this a try thinking I would regret it but not only didn’t I regret it I LOVED IT. It’s fast, easy and it does not have a processed taste which I expected. I warned everyone ahead of time that it might not be great but it was an easy meal. Everyone said “what do you mean it’s not great we love it”. I have to agree. If you’re looking for a relatively fast easy meal that’s tasty this one is one you might want too consider. No processed taste at all. It was done in an hour and only prep time really was cutting up the chicken breast. Only change I made was to add some Her*box chicken seasoning (which I think is the best) to the mix. Otherwise I followed the recipe exactly. Most recipes call for the chicken to be cooked prior to baking but this one didn’t and I wasn’t sure about it but after an hour I pulled a chicken bit out of the center and temperature checked it and it was done. My family really liked this and I will definitely be making this again and again. It’s easy and tasty. If you are in need of a fast and tasty meal this one fits the bill.

I enjoyed this recipe as did the rest of the family. I used long grain white rice. Not instant. Boneless chicken thighs instead of chicken breast. Substituted the water with chicken broth. Added a cup of sharp cheddar based on other suggestions.1/8 tsp cayenne and 1/4 tsp poultry seasoning. Omitted the salt due to the broth. This was a great simple recipe base , very tasty. Thank you for sharing. I will make it again and again.

4 boneless, skinless chicken breasts
1 1/2 cups of water
2 10 oz cans of cream of chicken
To Find Out All The Yummy Ingredients And The Step By Step Directions To Follow for this Delicious recipes, Go to the next page.