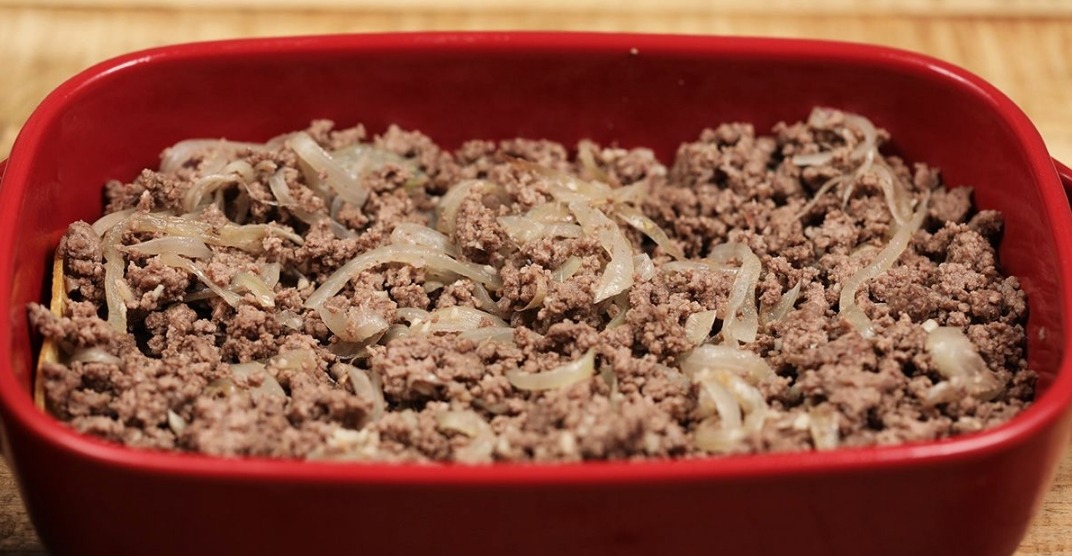 Oh gosh, these were fabulous. I used a whole packet of taco seasoning (misread the recipe), green chilie enchilada sauce (I’ve been craving it), and omitted the chili powder. Melting the sour cream and cheddar with the beef on the stove makes a creamy, lovely filling. And laying the black beans and olives on top (instead of incorporating them into the filling), is genius. The beans retain a nice little “snap” that hits your tounge at just the right time. I topped my enchiladas with jack cheese. I can’t say enough good things about this dish – it’s beyond delicious.

SOOOOOOOOOOO good!!! Listen to the awesome additions I added!!! So just like many others are also saying, I accidentally used a whole packet of taco seasoning. MAKE SURE YOU USE THE WHOLE PACKET! It was soooo flavorful and we all agreed it would NOT have been nearly as flavorful if I only used 1 Tb of that. I didn’t use parsley. I added almost a whole green pepper to the beef with the onion. After I pulled this out of the oven, I topped it with: chopped cilantro, green onions, tomatoes, Mexican cheese and I could not eat this without sour cream on the side! I will be making this every time I want enchiladas! Beef is so much better than chicken! Thank you!

OMG! My favorite recipe on this site so far! I have had two servings and I usually don’t even feel like eating after cooking! I made minor changes….I spooned some enchilada sauce into the baking pan prior to adding tortillas…..I also added diced tomatoes to the meat sauce. After the tortillas were in the pan I spooned some enchilada sauce over the tortillas and than added the cheese. It was delicious!! I had some left over meat sauce, so I added the remaining black beans and chopped olives and I will use the leftovers for nachos tomorrow night!!

READ ALSO!  SO WHAT’S THE DIFFERENCE BETWEEN CHUCK ROAST AND CHUCK STEAK?!

Ok, prepare yourself. If you don’t like reviews from people who alter the recipe, don’t read this. I used a differnt meat and method (stewed beef roast). But I followed the recipe exactly to make the filling and the enchiladas. Oh, wait, another mod: I made my own sauce from the site, “the best red enchilada sauce.” So, still felt like I needed to share how great the components of this recipe are. Really made a delicious enchilada. I’m sure ground beef would’ve been great also, but I had a small party to feed. No leftovers!!!!!

Really great recipe. I almost always have all of the ingredience on hand. The 1st time, I followed the recipe to the letter except that I used corn tortillas. I cannot use flour tortillas for enchiladas. I have images of a gummy, soggy leftover. The 2nd time, again followed the recipe almost exactly but I added the olives and cheese into the meat mixture. So much easier and it made the meat more of the star instead of olive. Next time, instead of using canned enchilada sauce, I am going to make one on this site. I will update my post if it makes a big difference.

2 pounds ground beef chuck
8 soft corn tortillas
3 tablespoons vegetable oil
1 cup thinly sliced onions
To Find Out All The Yummy Ingredients And The Step By Step Directions To Follow for this Delicious recipes, Go to the next page.