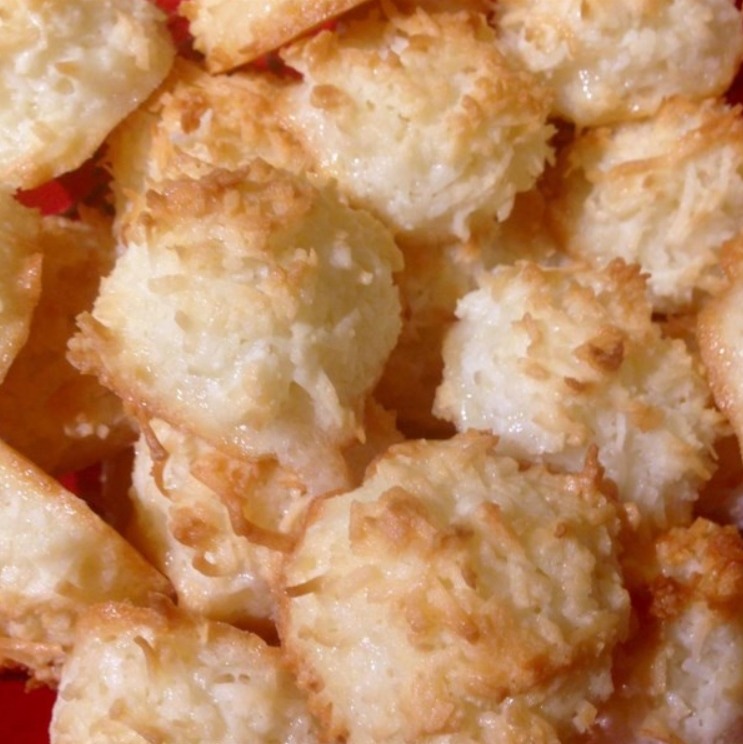 These were really good and not too sweet! I followed the recipe as written, except that I used a food processor and added 1/4 tsp. each of almond and vanilla extracts and about 1/3 cup of almonds. I baked them on parchment paper in a 350 degree oven for 18 minutes. Afterwards, when they were cool, I melted semi-sweet chocolate with a very small amount of shortening and drizzled it on top of each macaroon. They were slightly crisp on the outside and chewy on the inside.

I made these for my husband who LOVES macaroons. I on the other hand, can’t stand coconut and have never tried them before (nor will I). His feedback was that the flavor was good, but he wished they were a little bigger and had more uniform crispiness around the outside. They are moist and look pretty. He keeps eating them though, so something must be right!

I’ve worked my way through nearly every macaroon recipe on here. This is by far the best. Light in the center, crunchy around the edges, addictive! 🙂 Only thing I did differently was I used parchment paper instead of greasing the pans, and doubled the recipe. I otherwise followed the recipe exactly, the timing was spot on, and BOY are they good!

I made these exactly as written and they were both beautiful and delicious. I grew up eating coconut macaroons from a can at Passover time, and these are better and so easy. I used a melon baller to make pretty little mounds. Yummmm!

1 bag (14 oz) sweetened shredded coconut
1 can (14 oz) sweetened condensed milk…
To Find Out All The Yummy Ingredients And The Step By Step Directions To Follow for this Delicious recipes, Go to the next page.