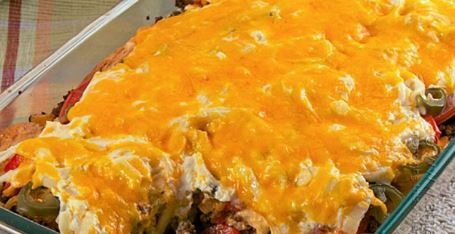 My brother was coming to town for a visit recently, and I knew exactly what he was going to do. He was going to show up to my house, starving, and start rifling through the cupboards. It’s just like when we were kids growing up at Mom and Dad’s. He would constantly be on the hunt for something to eat. Even after all these years, he still does the same thing. It used to annoy me, but now that I hardly ever seen him, I don’t mind it so much. I actually look forward to it.
This time though, I thought it would be nice to have something prepared that he could munch on without having to do the regular search and rescue mission of the food that I have in my kitchen. I found this layered casserole on Recipe Lion and knew he would love it.
He loves anything that comes out of a casserole dish covered in cheese first off, and that was what this was. I think he likes it so much because he knows there’s a huge pan and he can eat until he is really full. That’s what he did when I set this on the table. There was barely any left for anyone else!