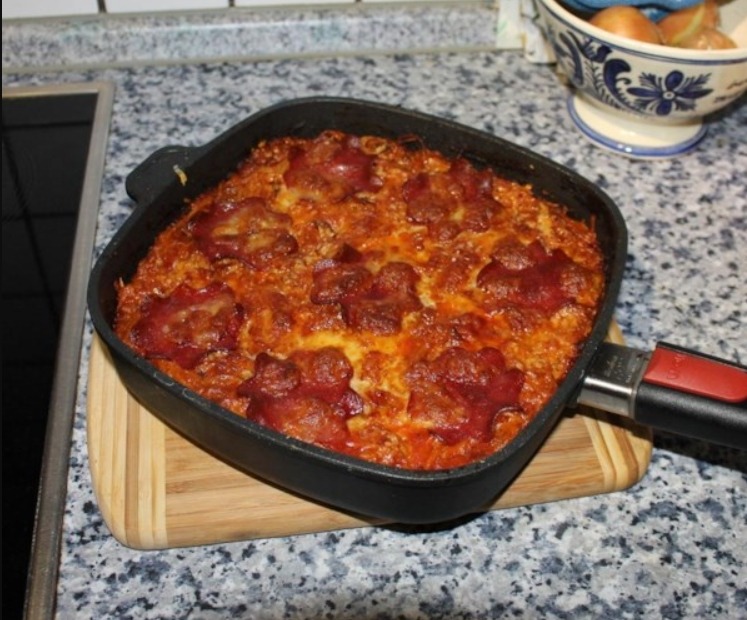 Just like mom made! Here were my adjustments: one pound of hamburger instead of two (plenty), no onions (preference), no Parmesan cheese (bummer) and I make my own spaghetti sauce so I think that’s why my dish wasn’t bland as some others were saying. (My suggestion would be to add Italian seasoning and some garlic powder/salt) Also I didn’t bake it in the oven, I just poured it all into my pot and heated it up in there. That’s not going to change the flavor I don’t think, it’s just one less dish to clean and because yes, that’s how my mom did it 😉

This was wonderful! I browned my ground beef, till it carmelized, then added an onion, a large bell pepper and mushrooms. I used Paul Newmans sauce…YUCK!! it was pretty bad…so off I went to the spice cabinet trying to doctor it up..italian seasoning,garlic powder and sugar..it was so bitter. I also added some roasted garlic that I did this morning and gave it a taste, pretty good. I cooked it on the stove top for several hours, it got nice and thick. Then I added the sour cream and proceded with the recipe. DELICIOUS!!! I used my LARGE glass casserole dish,I don’t think it would have fit in a 9×13.So we have supper for the next couple of nights. Thanks for sharing.

Made this recipe instead of regular spaghetti. It was a big hit. Easy and delicious. I halved recipe and added a little more cheese. I didn’t have sour cream so I used a little cream cheese instead and it worked fine. My son ate the left overs…. which he normally won’t touch. Great recipe that may just replace spaghetti in this? house! Fyi…when I served it next day I sprinkled a little fresh parmesan cheese over it and microwaved! Yum!

READ ALSO!  Blueberry Coffee Cake - This cake is super for a quick breakfast snack with coffee.

I was worried about adding sour cream but did it anyway. It was delish! (I did not use fat free sour cream either). I also added 4 oz of cream cheese, 1/2 cup shredded parmesan, and 1/4 cup of cubed butter to the hot pasta before combining it with the meat mixture which was 50/50 ground beef and ground Italian sausage.

Total winner! Husband and toddler loved it. My modifications: made it with ground turkey instead of beef. And I seasoned the turkey with salt, pepper, crushed red pepper and garlic powder. Also, I used minced onions by McCormick. I drained the spaghetti and then put it back in its pot where I combined everything. This makes A LOT and it would have been too much to combine everything in the skillet I browned the meat in. I totally overlooked the bit about covering with foil to bake. But I’m glad I did because it allowed the top to crisp up a little, which we all really liked. This is going in the meal rotation!