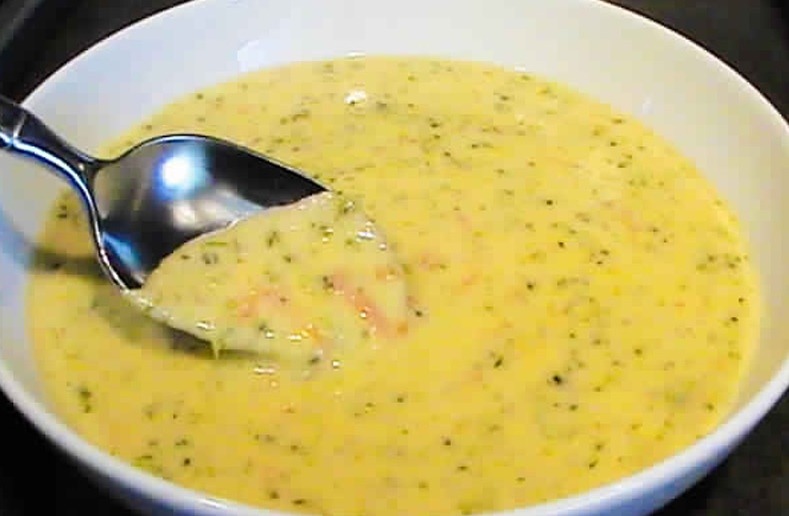 Most Helpful Reviews Panera(R) Broccoli Cheese Soup
My husband loves Panera® broccoli cheddar soup but it went up in price and therefore we set out on a hunt to create the perfect broccoli cheddar soup. Here is what we came up with. There are tons of variations and options to make this soup your own. You can add extra veggies, different cheeses, garlic to your onions, a little nutmeg to the finished soup, green onions, sour cream, etc. The list goes on and on. Make it your own! Serve topped with cheese.

This has the potential to be a really great broccoli cheese soup. As is, it’s just o.k. To me it tasted like broccoli with cheese sauce. It was bland and seemed to be lacking something. I’m thinking it’s the cooking process. It seems backwards. Typically, milk products are added last because simmering can cause curdling, especially if simmered for a long period of time. It works out o.k. for this recipe because it’s so thick from the cheese that you don’t really notice. What I found odd was that half of the cooking time is dedicated to just simmering the milk with plain stock, absent of any vegetables or seasonings of any kind. It’s only in the latter stage when you add the vegetables and those are only cooked just long enough until tender. Onions, celery, and carrots are essential when it comes to adding flavor to any soup broth and it takes time to develop that flavor. I would suggest adding those 3 ingredients to the chicken broth at the beginning so they have more cook time. The other change I would make is when to add the milk. I would start by adding the broth to the flour first and then the milk, but that’s just me.

I made this soup and my husband (who is not a really big soup fan) could not get enough of it. Only difference I made to the recipe was using 1 cup milk and 1 cup cream (since I had it on hand), rather than 2 cups 2%. Also, I didn’t have the full amount of cheddar, so I threw in maybe 1/3 cup slab of veleeta to make up the difference. But I almost never have velveeta, and would recommend sticking with the cheddar just out of principle’s sake. I used the stock to make the flour thickener rather than the milk/cream (just a preference). Then I added the milk and cream at the end with the cheese. It was definitely a delicious and thick soup, just like Panera’s. Yum! Thanks a bunch, gildawen!

I’ve made this soup before using a different recipe, couldn’t find the old recipe so I decided to give this a try. I used the exact measurements and ingredients listed except celery, the only other difference I made was instead of simmering the milk/flour/butter to thicken I used chicken broth as the liquid, let it simmer a little (around 7 minutes) added all my veggies and 1/2 cup of water (my burners are too strong and I feared all the liquid evaporating and becoming a pudding instead of a soup) and let it simmer until veggies were tender. Last step I added milk, cheese and served. WOW. BIG HIT with me and my husband who doesn’t like soup. The flavor was all there, just be careful with adding salt as most chicken stocks already have sodium and cheese adds a lot.

1 tablespoon melted butter
1/2 medium chopped onion
1/4 cup melted butter
To Find Out All The Yummy Ingredients And The Step By Step Directions To Follow for this Delicious recipes, Go to the next page.