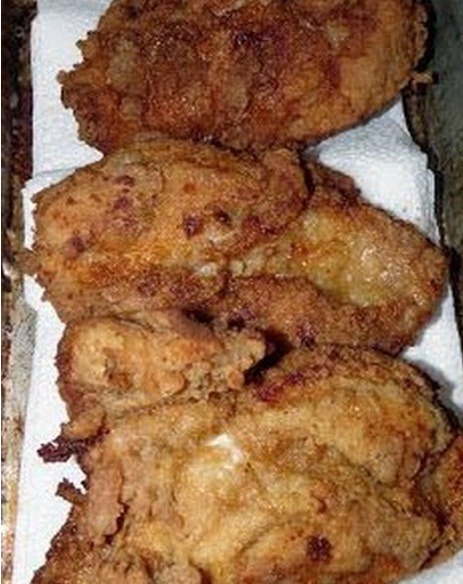 I know how passionate people can get about fried chicken, and I’m not one to tell you who makes the best, but if you were to ask Ed Levine, the Serious Eats overlord, he’d tell you that it’s Gus’s, a sixty-seven-year-old institution in Mason, Tennessee. They serve fried chicken that he describes as incredibly crunchy, with a crisp, craggy crust, juicy meat, and a “cosmic oneness” between the breading and the skin. We’re talking fried chicken so good that you have to resort to metaphysics to make sense of it.

For me, as a kid growing up in New York, fried chicken came from one place, and one place only: those grease-stained cardboard buckets peddled by the Colonel himself. To my young mind, KFC’s extra-crispy was about as good as it got. I distinctly remember eating it: picking the coating off in big, fat chunks; tasting the spicy, salty grease; and shredding the meat underneath with my fingers and delivering it to my waiting mouth. It was heavenly.

But times have changed, and as is often the case, revisiting those fond childhood memories results only in disappointment and disillusionment. All over the country, there’s a fried chicken and soul food renaissance going on. Even the fanciest restaurants in New York are adding it to their menus. My eyes and my taste buds have been opened to what fried chicken truly can be. I may still dig the ultracrunchy, well-spiced crust that KFC puts on its birds, but that’s about the only thing it has going for it. Flaccid skin, dry and stringy breast meat, and chicken that tastes like, well, it’s hard to tell if it really tastes like anything once you get rid of the crust.

Please continue to Next Page (>) for the full cooking ingredients and instructions.