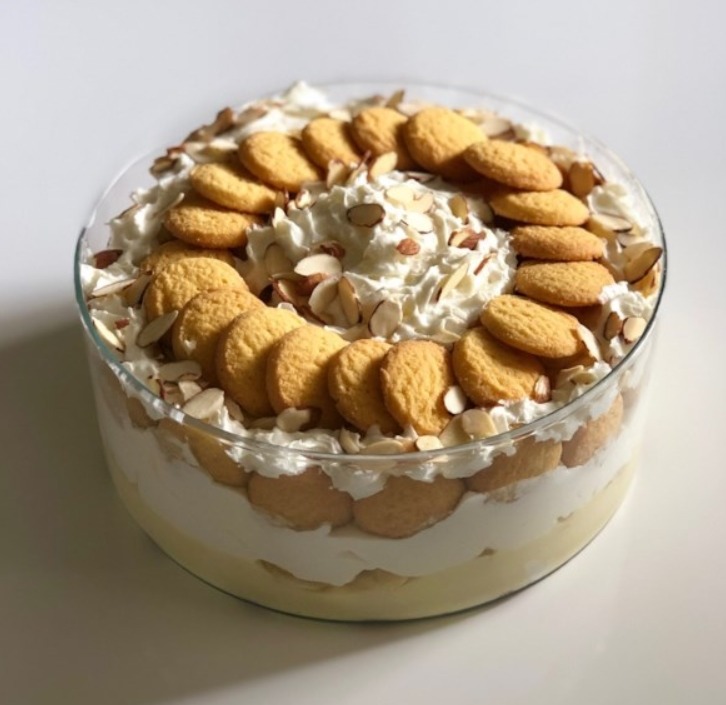 This is the same recipe that my mother has made for years, and it is often said that it was this pudding that helped her snag her husband. I have noticed a few problems people have been having with the recipe, and as usual it is not problems really with the recipe, but with the person/and or technique used while making it. (Don’t mean to sound harsh.) First off, we always use skim milk in the recipe, and have never had a any problems. Secondly, NEVER use banana pudding to make this. Though I’m sure it would taste ok, it just isn’t like the old fashioned stuff, and if you use the banana flavored pudding you always will have that fake banana flavoring floating around in it…YUCK. Third, one 5 oz. package is plenty to make this pudding thick. Just make sure to use ice cold milk when mixing it.
Fourth, when creaming the cream cheese. It must be at room temperature before you can cream it or add the other ingredients to it, otherwise, you will get a lumpy mess. It is very important to cream it well with the sweetened condensed milk, because the air incorperated into this adds body and thickness to the overall dish. Finally, the dish that the recipe says to display the pudding in is merely a suggestion. This isn’t a baked recipe, so it won’t matter at all what type of dish you use. I prefer a large decorative glass bowl, and that way it can add a little more style to the whole dinner just by looking at it, and after that first bite, none of your guests/family/friends will

I just have one comment. People who give reviews and have changed the recipe are not helpful at all. For once, I would like to see reviews based on exactly how the recipe is written.

Instead of the one larger box of instant vanilla pudding, I used one small box of instant vanilla pudding and one small box of instant banana cream pudding. I also replaced half the milk with heavy cream and used a tub of the extra creamy Cool Whip instead of the regular Cool Whip. Also, instead of the whole can of sweetened condensed milk, I used less than half because I didn’t want it to be too sweet. I also crumbled some Nilla wafers on the top for a better presentation. I also used a smaller pan (I used a deeper, square casserole dish) and layered it in two layers instead of just one. I also put the sliced bananas in some diluted lemon juice to prevent browning. It is absolutely delicious and looks very appetizing!

I took this to a party, and everyone loved it. I did make a few changes – I used Pepperidge Farm Chessmen cookies in place of the Nilla wafers. I used only 2 cups milk to mix into the instant pudding. I beat the pudding & milk with a mixer, then beat the cream cheese with the condensed milk separately, stirred the cool whip into the cheese mixture, and added that to the instant pudding. I used 8 bananas to make the 13 x 9 panful. The pudding set up perfectly and cut like a dream – no running or soupiness. The bananas did darken after we cut into it, but they tasted just as good the second day. This will serve a TON of people. This is my new favorite pudding recipe!

I have been making this recipe for over two years for family and large parties and have NEVER had any leftovers. People get upset if I don’t bring this with me! I use 1-3.4oz. pkg of French Vanilla Instant pudding mix, and 1/2 of a 3.4oz. pkg of Banana Instant pudding mix, only 1/2 of the can of condensed milk to keep it from being overly sweet. I do also use more bananas, about six cover the bottom of a 9X13 pan. Everything else is the same. Yes, the cream cheese definately needs to be room temperature. EVERYONE who has tried this has loved it, asked for the recipe, and always wants me to bring it to their get-together. It is not like the original on-the-stove banana pudding which is very rich, this is a much lighter version and for the thousands that I have fed, much more preferred.

1/2 cup sugar
2 1/2 tablespoons cornstarch
To Find Out All The Yummy Ingredients And The Step By Step Directions To Follow for this Delicious recipes, Go to the next page.