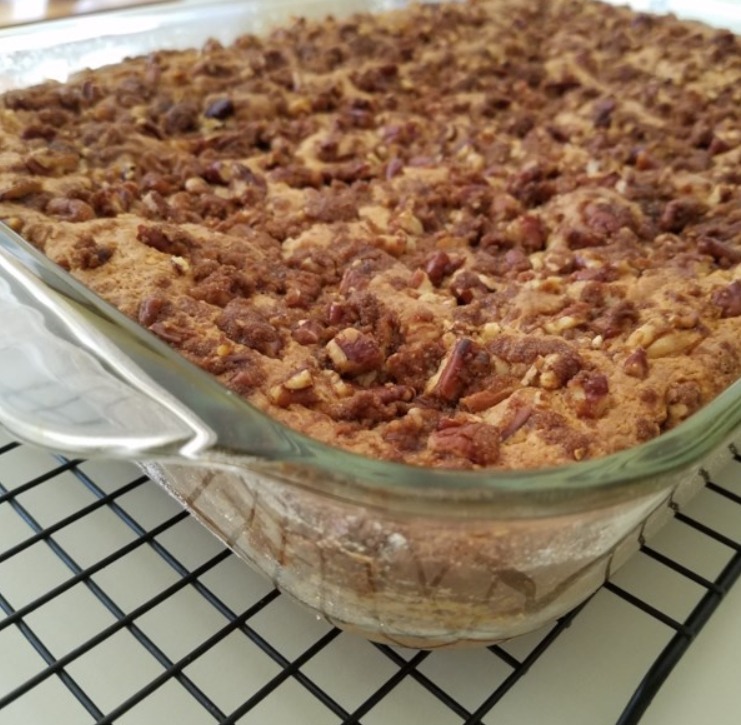 I recently saw this recipe on television, and the chef first put waxed paper lining the pie dish and THEN put the pecan mixture on top of that, so the pecans would not stick. It turned out very well. I would suggest adding that step to this! Great recipe though!

There’s a type of cake that comes out of Georgia that’s chock full of pecans and coconuts and oh my… is it delightful. It’s kind of like someone left the chocolate out of a German chocolate cake and let that sticky-crunchy-sweetness from the pecan-coconut combo really shine. It’s creamy and light, a little bit chewy with a little bit of crunch, and it always leaves us feeling inspired.

So we took that inspiration and made this cake, which has all of the lovely qualities of the original but is, you know, upside down version. Which is a really great thing. Here’s why:

I made this recipe or one like it when I once worked at a Deli in our small town – the best way I’ve found is to line the pan with foil then add the nut mixture, bottom crust, apples, then top crust – if you roll the crust under before crimping the pie won’t leak when turned upside down – great recipe! Easy to make –

Upside-down cakes tend to be quite a bit simpler to make than an elaborate layer cake. There’s no frosting to deal with. No layers to stack. You just sprinkle the topping down in the bottom of the pan before pouring your batter over. And in this case, that topping is chopped pecans, sweet coconut, a touch of cinnamon and vanilla, and butter and brown sugar that melts together as it bakes.

When it comes out of the oven and you invert the cake, all of that goodness oozes down into and over the cake and those crunchy, now-candied pecans rise out of the top, just begging you to dig in.

This is a great recipe! Easy and very tasty. Very nice on a chilly autumn day. Although, I did do a few alterations. I lined the pie plate with parchment paper, allowing the excess to stand up on the sides. I also put a row of halved pecans around the bottom. I added an about 1/2 cup of white raisins and 1/2 cup of dried cranberries to the apple mixture.

After inverting the pie I allowed the pie to cool for about 20 minutes and removed the parchment paper. The wonderful pecan mixture was also on the sides like icing. It was beautiful and the pie plate was completely clean. Finished off with a scoop of vanilla ice cream. The family loved it. A new favorite!!!

Making this as an upside-down cake means that it’s also a one-bowl cake. After the topping goes into the baking pan, the batter mixes up in one bowl, which means there aren’t a lot of dishes to wash, but there’s still a lot of moist and tender cake to go around. It’s easy enough that you’ll want to make it every day, and it’s tasty enough to justify it too. Happy baking!

I made this pie for Thanksgiving and everyone loved it. You just need to make sure you don’t let it cool for too long before turning it a plate or else it sticks.