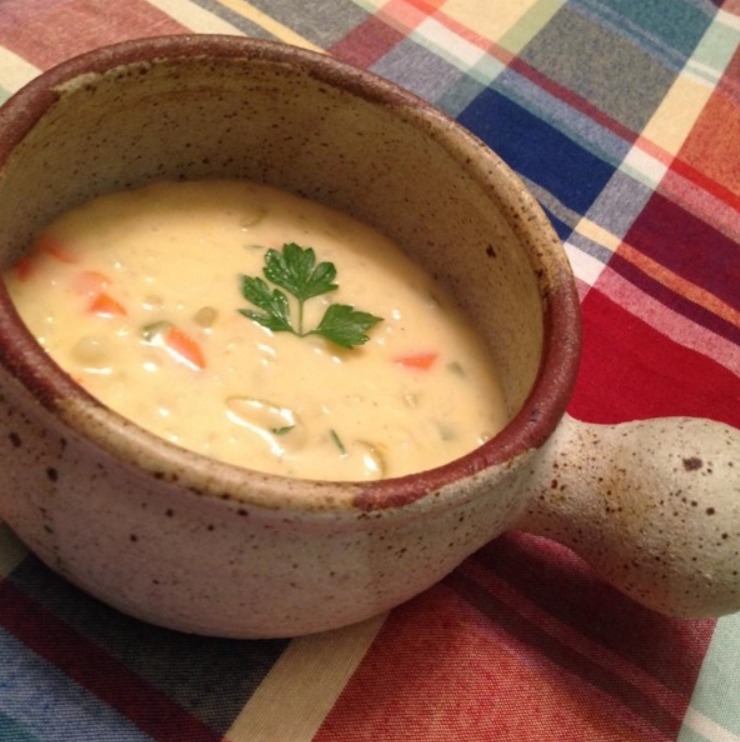 Great recipe. To lower the calorie count I used a vegetable spray to saute instead of butter, used half of the cheese and blended 1/3 of the soup in my blender rather than thickening with the flour and milk. Still tastes great and is healthier as I try to drop post holiday pounds!

My family and I really liked this chowder~! I did follow the suggestions and used a cup more water than called for, and it was still thick, but good. I used all 3 cups cheese because we absolutely love cheese. However, it did make it a little more like a dip and less like a soup, so I will only use 2 cups next time as other reviewers suggested. What I LOVE about this recipe is you can literally use whatever veggies and whatever cheese your family likes most. You can’t mess it up! I used frozen and fresh veggies, but I think next time I will add more. I will also not simmer for 20 minutes, but only about 10 minutes until crisp tender, as the veggies get even softer when the chowder has to boil again. I look forward to experimenting with this recipe in the future as this will be a regular for us!

I recommend this recipe highly. I followed other recommendations to go light on the cheese and had to add the rest of the cheese later. I’m learning to take suggestions through the context of the reviewers own personal preference. If you like thick soup, as I do–by all means leave the cheese in. In my opinion, it’s not overwhelming and tastes great. The soup tastes delicious without cheese too, so let common sense lead you to what tastes best to YOU!

Really wonderful! I wondered how it could be so good, so decided to try it. I added a whole red pepper, and a whole chopped onion and a 1/2 head of chopped cabbage because I had it on hand. My secret ingedient in all soups is using a cup of juice rendered from caramelizing 10 sliced onions in the crockpot with one cube of butter for about 18 hours. I strain, and pkg the onions and the juice each in 1 cup baggies, and freeze. The onions go on meat, and the juice into soups. With this addition this chowder should go to a 10 star rating!

This is SOOOO good!! I didn’t use all the veggies that the recipe called for. I just used whatever I had on hand. I also omitted the chicken bouillon, the recipe doesn’t need it anyway. Definitely a keeper!!

I fixed this last Thanksgiving using vegetable bouillon so that my vegetarian friends could enjoy it. I used butter and only 1/4 cup of flour, because we wanted a creamy rather than a thick chowder. I put the shredded cheese in a bowl and let folks put their own over the top when they served themselves in our buffet. Everyone liked it so much I ended up fixing it again for Christmas…and we’ll definitely have it as the “keep us going till dinner” soup this Thanksgiving, too!