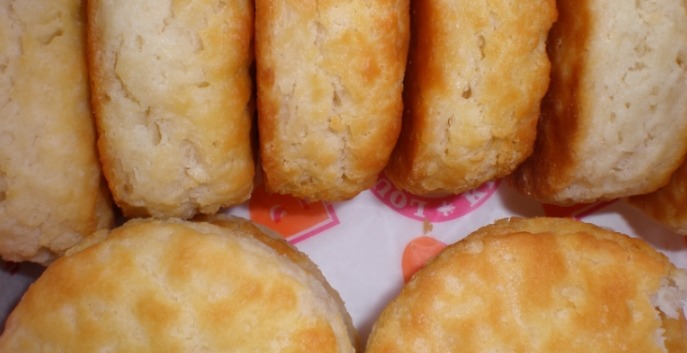 I had made pancakes, some sausage, eggs, and cut up some fresh fruit for breakfast.

It looked like there was going to be plenty to go around until my husband walked in the door from his early morning fishing trip with his friend and the son of that friend. He told me how he knew I would be making a nice big breakfast, so they invited them over to join us. That was fine, the only problem was I had planned to feed four people, not six. If you serve dinner, you know what a difference that is.

There had to be something that I could make in a hurry that would allow the foods that I had already prepared spread a bit further so everyone could get filled up. I instantly came to these biscuits that I had seen on Facebook a short while earlier.

Thankfully, I had printed out the recipe and had it nearby. It was one of those times when I must have known what was coming. Maybe because it’s not the first time that it’s happened. Not only were these simple and delicious, they did the job that I had hoped they would, and nobody walked away hungry.

The nice thing about these biscuits is the fact that you probably already have all the ingredients you need in your kitchen. I know that I almost always do. That makes it nice when you are looking for something quick for breakfast, or a simple bread to pair up with your dinner. They are done in just a few minutes so you don’t have to worry about waiting around for them. They are way better then those canned biscuits, and just about as easy too!

There won’t be any more store-bought biscuits in my house ever again!
To Find Out All The Yummy Ingredients And The Step By Step Directions To Follow for this Delicious recipes, Go to the next page.